The Complete Guide to Headless Commerce

The Evolution of the Commerce Experience

With headless eCommerce earning so much attention over the past few years, it’s worthwhile to look at the historical trends and changing customer expectations that brought us to this point.

The eCommerce experience was born with the internet, though it took a little time to find its feet. Back in 1982, the world’s first eCommerce company opened: The Boston Computer Exchange.  However, the internet wasn’t public at this point, and widespread adoption of eCommerce ideas hadn’t caught on. It wasn’t until the World Wide Web went live in 1991 that eCommerce radically expanded.

The Rise of the Internet

Although several other niche businesses joined BCE as eCommerce providers throughout the ‘80s, 1991 was the true turning point for it.

Of course, nobody at this point could have predicted just how big the eCommerce industry would get. (They certainly wouldn’t have guessed that eCommerce sales would make up 13.7% of global retail sales in 2019.) But this growth was inevitable.

Consumers realized the advantages of moving the shopping experience away from brick-and-mortar retailers and into a digital network. They had more comfort and control over the purchasing process, they were more easily able to shop based on price, and they had access to a wider selection of products than they usually had in stores. These would become key drivers of the eCommerce customer experience, but back then, they were new concepts that consumers had to learn about.

And naturally, once buyers became accustomed to a great online shopping experience, the eCommerce world exploded.

The Era of eCommerce

Consumers flocked to online stores because of the strength of the digital shopping experience. Traditional retailers just couldn’t match the convenience of shopping from home, and they certainly couldn’t undercut online retailers on price.

It wasn’t long before the digital shopping experience became an inseparable part of consumers’ lives. Phrases like “home page,” “shopping cart,” or even “bookmark” turned from tech jargon into household terms. And while these ‘90s-era platforms offered a rudimentary UX compared to what we have today, their widespread adoption created expectations for what consumers wanted from their online stores.

And even though eCommerce options have since expanded, these fundamental expectations remain the same.

Before mobile became a thing, competitive eCommerce providers had one basic approach: pushing their products through their online store on a desktop computer, featuring a tightly-integrated frontend and backend. Desktop was the only game in town, so this was the industry standard for creating an eCommerce experience. 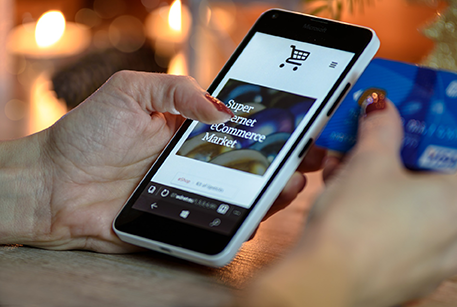 But as we know, mobile has become a force to be reckoned with, with 53.9% of all retail eCommerce sales taking place on mobile by 2021. The growth in mobile commerce presents a challenge to traditional eCommerce practices, which, at least initially, struggled to bridge customer touchpoints across desktop and mobile.

A full-stack solution made sense when the majority of web traffic came from desktop channels. But in a world where even small businesses have multiple eCommerce channels to accommodate, a traditional eCommerce solution isn’t enough.

It worked well for its time, but eCommerce moves fast, and traditional solutions were destined to be just another stepping stone in the eCommerce evolution.

Traditional eCommerce is limited by its inseparable front/backend, creating a platform that struggles to integrate content, data, and other commerce systems without extensive add-ons and APIs. In addition, each time a company wants to redesign its user experience, it’ll mean rebuilding the experience from scratch--the eCommerce platform included. The effort, time and cost of the project have now ballooned.

Companies have gotten by for a while, but with so many new channels, internet-of-things (IoT) devices, and customer touchpoints to account for, modern businesses have realized that they need a new strategy for their eCommerce approach.

This brings us to headless commerce—the latest innovation in the eCommerce world. Headless commerce subverts the notions of what it means to run an eCommerce platform. Rather than focusing on direct sales, businesses leverage content management systems (CMS) to educate and prime leads before buying. They’re able to customize their frontends to create eCommerce experiences that are effective yet differentiated from competitors.

Headless changes the eCommerce game by bringing unheard-of flexibility to the process. And best of all, it’s a logical step (decoupling = flexibility) that any eCommerce business can get behind. And when viewed in the context of the entire spectrum of eCommerce history, it’s clear that headless is a natural step forward.

4 Examples of When You Should Consider Headless Commerce

Slatwall Commerce Featured on Withum's "Take Me to the Cloud" Podcast

Benefits of Headless Commerce for WordPress

Contact us to ask questions or schedule a demo. Our experts are here to help!