The California Prison Industry (CALPIA) may just be one of the most unusual organizations around. An entirely self-supporting business, it offers valuable job-training, skill-building, and employment opportunities to thousands of inmates who are incarcerated in the California Department of Corrections and Rehabilitation institutions. CALPIA produces and sells a huge variety of goods and services – everything from clothing and textiles to services, equipment, and furniture. Its customers include all of California’s state agencies, as well as other government agencies. At the heart of CALPIA’s mission is the belief that helping inmates develop solid work skills reduces recidivism and gives them the support and preparation they need to lead productive lives outside prison walls. As a matter of fact, the paroled offenders who are alumni of CALPIA programs are significantly less likely to return to prison than general population offenders.

But late in 2016, CALPIA was facing a not-so-unusual problem that many companies can identify with: The organization needed to modernize the way it did business, especially around the area of eCommerce. As Emily Bersin, ten24’s support manager, explains, the system that CALPIA was using to manage its site was woefully outdated. “The infrastructure was 20 years old, which made it a dinosaur,” she says. “The technology was no longer compatible with CALPIA’s immediate and long-term eCommerce goals.” In addition, the site was incompatible with most modern web browsers, mobile phones and tablets. It was clearly time for a change.

What was also clear was that this would be no ordinary eCommerce project. For starters, CALPIA decided to update both its content site as well as its actual store site. It also wanted a seamless transition between the two new sites, so that visitors would have the same experience regardless of the site they were in. The organization had a long list of special requirements that had to be considered. “CALPIA came to us with an extremely robust project requirement spec,” Bersin notes. “They knew what they needed and they had all the related tasks built out for the content and the catalog sites.”

Typically, an eCommerce implementation is just ten24. Occasionally, we might collaborate with one other party. But here was a scenario where four different players would need to work together.

One of the other things that made the CALPIA implementation different was the way it would be tackled. Blue River – the company behind the Mura content management system – would be in charge of redesigning the CALPIA corporate website. Creation and implementation of the catalog website would be ten24’s responsibility. Blue River and ten24 would be working simultaneously on their respective sites. A third partner, Anvaya Solutions, would handle the security audits. There was even a fourth partner involved – CALPIA itself. Once orders came in from the catalog website through ten24’s Slatwall, they would be imported into and processed through CALPIA’s in-house IT systems for processing and fulfillment. Remember: Prison inmates actually perform order fulfillment. Because they aren’t allowed access to the Internet, they need to work from hard-copy printouts of the orders.

By January 2017, work was underway. Orchestrating this project and completing it successfully and on time required lots of good old-fashioned organization and communication. For the next 10 months, Blue River, ten24, and Anvaya met on a weekly basis. ten24 went through its requirements engineering process with Blue River and Anvaya to ensure that all sprints were on schedule and all milestones were met. A separate series of weekly meetings between ten24 and CALPIA managed the implementation and development of the store site. And of course, there was plenty of daily communication back and forth between all of the different teams to keep everyone on task.

Both sites – content and catalog – would launch simultaneously, so there was a detailed and incredibly robust testing schedule that needed to be in place. The content site would be tested first with Blue River, followed by testing of the full store catalog site with ten24. Complete, end-to-end testing would happen on both sites before everything went live. In October 2017, all of that hard work paid off when the sites launched. Bersin says the timing was especially noteworthy. “We went live the same day I went on maternity leave,” she points out. “The project manager at CALPIA and I joked that we were both having babies!

Slatwall’s versatility and functionality mean that CALPIA’s new catalog site is now able to deliver maximum efficiencies to the organization, the inmates who are employed by it, and the customers who purchase goods and services from it. For example, ten24 custom-designed the catalog site to handle a particularly heavy volume of large purchase orders, as opposed to credit-card orders. That’s because in CALPIA’s day-to-day business, money is going from one government agency to another. It’s easier and more efficient to make those transactions using a purchase order. 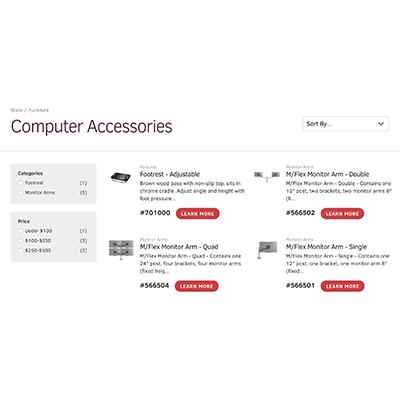 These aren’t your typical POs, however. There might be an entire annual budget’s worth of one agency’s or department’s purchase on a single PO. And the items on that PO are not usually shipping all at once. Rather, they’re being shipped at lots of different times. As Bersin explains, “The sheer number of POs that would be going through the site was a distinctive feature of this project.”

The ten24 team also had to incorporate some unique searching features around all those POs. The CALPIA store site is public-facing, so that anyone who has a PO number can click on the “Order Status” button on the top navigation bar. This reveals all information associated with a given order, including who placed the order, what it contains, the prices of everything that was purchased, where it’s being delivered, whether it’s reached its destination, and when that happened. It’s the most heavily used part of the catalog site and is designed to be self-serving, thus eliminating the need to call customer service for the same information.

Efficiencies that are Built In 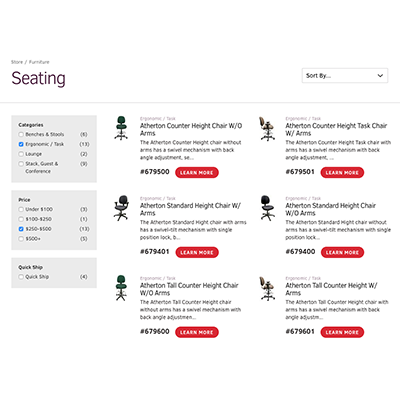 ten24 also had to make sure that Slatwall accommodated CALPIA’s specific requirements for account setup and checkout. For instance, in order to create a CALPIA account, log in, and make purchases, visitors must provide an approved email domain. No domain, no account. For certain types of purchases, like furniture, Slatwall ensures that at checkout visitors can add an option to his or her shopping cart to have someone else do the assembly and set up for an additional fee.

Bersin says that CALPIA is thrilled with all of the changes. “Customers are able to search and filter the product database efficiently and the checkout process is more streamlined and user-friendly,” she explains. Future enhancements include enabling the catalog site to connect to California’s statewide accounting system. For now, though, CALPIA is enjoying all of the advantages that its new eCommerce site brings to its operations.

At a Glance - Project Highlights

Contact us to ask questions or schedule a demo. Our experts are here to help!